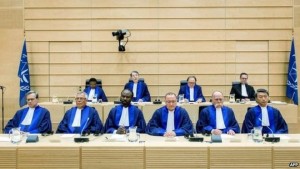 The African Union (AU) criticized the International Criminal Court (ICC) on Wednesday for being biased and unfair in its focus on African cases.

“We have arrived at the conclusion that the International Criminal Court, whose establishment was strongly supported by Africa…is no longer a court for all,” Ethiopian Foreign Minister Tedros Adhanom Ghebreyesus said.

Ghebreyesus represented the AU at the 14th session of the Assembly of States Parties – a yearly meeting between the 123 countries signed to the ICC. Members make ICC laws during the meetings.

African leaders have criticized the ICC for targeting the continent. Since it was founded in 2012, a large percent of all cases handled by the court have come for Africa.

Last year, the ICC dropped the charges against Kenyatta as the case imploded. Now, the AU, the largest ICC bloc after South America, is calling for Ruto and Sang case to be dropped.

However, ICC chief prosecutor Fatou Bensouda would not budge. Her plan to use previously recorded testimonies in the cases against Ruto has been opposed.

Kenya argued that Rule 68, which would permit Bensouda to use previously recanted evidence, cannot apply.

Kenya was able to convince the Assembly of State Parties to debate the use of Rule 68 at the annual meeting on Wednesday.

“We believe the trial chamber judges acted outside of their authority in agreeing (with the prosecutor) to admit recanted evidence in this ongoing cases,” Kenya’s Foreign Minister Amina Mohamed said.

Ghebreyesus said the “use of recanted testimony against Deputy President William Ruto is an unacceptable practice that will set a dangerous precedent.”

However, Bensouda and ICC President Silvia Fernandez argued that interfering with the independence of the court could have negative effects. The ICC pressed members of the meeting to make decisions that wouldn’t interfere with the court’s mandate.

Ghebreyesus warned that Africa’s common resolve should not be tested.

“The continent may be left with no other than to reserve the right to take measures it may think necessary in the interest of preserving and safeguarding the stability, dignity, sovereignty and integrity of the continent,” he said.

Bensouda maintained that the ICC is not biased and that the AU’s criticism has been blown out of proportion. She said the criticism’s against the ICC “does not match the reality…it is a blanket criticism.”

“All the cases that we have except Kenya, Sudan and Libya, all those cases were at the request of African states asking for the ICC’s intervention,” she noted.

Pretoria said although it was a member of the ICC founding statue, it couldn’t just arrest Bashir when he was attending an international AU summit in the country.

The case against South Africa is currently before the ICC.