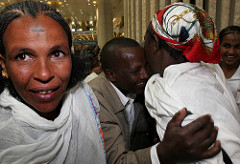 Israel has approved the immigration of the last community of Ethiopians with Jewish ancestry from Africa. The announcement made on Sunday ended years of debate about the eligibility of more than 9,000 members of the Falash Mura community to settle in Israel.

“Today we have taken an important decision, to bring to Israel within the next five years the last of the communities with links to Israel waiting in Addis Ababa and Gonder,” Prime Minister Benjamin Netanyahu said.

The Falash Mura are Ethiopians, who claim Jewish ancestry. However, they converted to Christianity in the 18th and 19th centuries. Reports indicate that many converted under persecution.

The issue of their eligibility to settle in Israel has been debated for decades because of their faith. The Falash Mura are not considered Jewish. However, many of them have relatives among the Ethiopian Jewish community living in Israel.

According to Israel’s Interior Ministry, members of the Falash Mura would be accepted after successfully converting. The ultra-Orthodox chief rabbinate would oversee the conversion process.

Reports estimate that there are about 9,100 members of the Falash Mura community awaiting settlement in Israel. Many have been living in transit for years awaiting the government’s decision.

The fate of the Falash Mura hanged in the balance in 2013 after Israel announced the completion of an operation to resettle Ethiopian Jews from Africa.

“Our professionals have developed a comprehensive plan to bring the remainder of the families currently awaiting immigration to Israel,” Avi Mayer, Jewish Agency spokesman said on Sunday.

Israel’s law of return grants all Jews citizenship and the right to live in Israel.

About 92,000 of the 135,500 Ethiopian Jews currently residing in Israel were brought to the country. Ethiopian Jews complained of experiencing discrimination, racism and poverty in Israel. Early this year, the community took the streets of Tel Aviv violently in protests about their living condition.

Ethiopian Jews reportedly live in the poorest sections of Israeli cities and as much as a third of them live below the poverty line.

Netanyahu’s government has vowed to address this problem and bring about change.