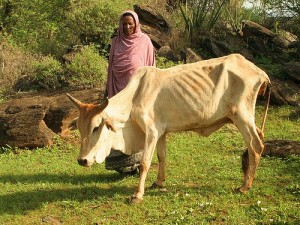 Ethiopia’s agriculture-dependent rural population has been affected by severe weather patterns. This year, the worst drought in a decade is expected to hit a large part of the country and other East African nations.

Meteorologists say the drought, which was triggered by reduced rainfall leading to poor crop yields, has been worsened by El Nino. The weather phenomenon that leads to the warming of sea-surface temperatures in the Pacific Ocean is expected to be one of the strongest in recent years.

Livestock production has dropped drastically in Ethiopia as hundreds wither away in recent months due to severe drought. The situation has also triggered food insecurity in a large part of Ethiopia, which is normally green and productive.

Ethiopia is currently facing a major food crisis. Reports indicate that 8.2 million people are in dire need of food assistance. The number is expected to rise to 15 million by next year.

According to the United Nations Children’s Fund (UNICEF), over 300,000 children are already suffering from malnutrition and the condition could worsen – resulting in stunted physical and mental development, even death.

The Ethiopia government initially said it did not want help from the international community to fend for its citizens in drought affected areas. The government has however admitted that it needs help to deal with the humanitarian crisis.

Despite providing up to $192 million for food aid, the Ethiopian government says it needs an additional $596 from the international community to boost its relief response.

“The government has so far spent some two billion birr ($96 million) on relief and support”, Prime Minister Hailemariam Desalegn said on Thursday. He stressed that the government is dedicated on providing necessary humanitarian supplies to those affected.

Pundits say the focus of the international community has been shifted to the mounting humanitarian crisis in the Middle East. As a result, a large percent of the world’s humanitarian resources has been diverted to helping civilians ravaged by wars.

However, a number of humanitarian groups are calling for more attention to be given to Ethiopia’s exacerbating food crisis.

John Aylieff, a United Nations World Food Program official, said the “collective effort of the entire international community” will be required to assist Ethiopia through this crisis.

John Graham, Director of Save the Children Ethiopia, said millions, especially children, are in danger. He called on donors and the international community to help Ethiopia through this difficult time.

“The Ethiopian government is doing what it can to respond, diverting funds from road building and other projects – but international donors must also provide more relief now so that we can meet the needs of people affected by this incredibly serious drought – especially vulnerable children – before it’s too late,” Graham appealed.