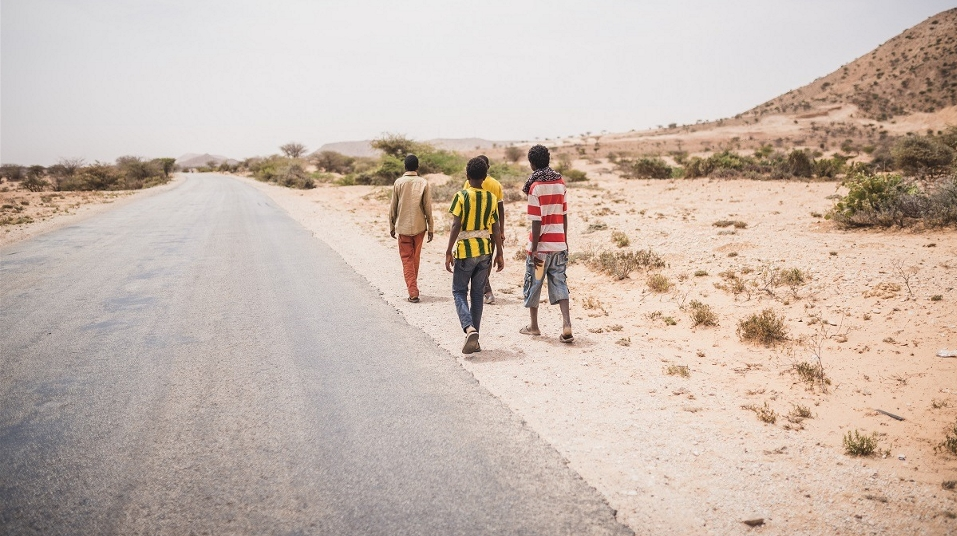 HARGEISA – Qader and Abdi are two weeks into their journey. Carrying only one empty plastic water bottle each, flattened, with no liquid to return it to its cylindrical shape, the two men figure they will be walking for another month-and-a-half before they reach the sea. From there, they will take a smuggler boat the short distance to Yemen, where another 600-kilometre walk lies ahead before they may reach their final destination, Saudi Arabia.

The pair – members of Ethiopia’s largest ethnic group, the Oromo, which activists charge is systematically disenfranchised by the government – are walking along an uncrowded road connecting the capital of Somaliland, Hargeisa, to a northern port city. They walk because they cannot afford the roughly $150-200 that a series of smugglers would charge to take them from the Ethiopian border east through Somaliland to the port of Bosaso in the neighbouring semi-autonomous region of Puntland.

“We will walk until we become weak,” said 30-year-old Qader, who withheld his last name to protect his identity. He and his 19-year-old companion are dressed in dirtied long-sleeve shirts to shield them from the early morning sun, which will become unbearable by midday. They have made it this far off the good will of Somalilanders who offer them small change or meals as they pass.

There is a small risk they could be arrested so they veer off the paved road near checkpoints but quickly return so as not to lose their way. Although walking along roads in Somaliland – a self-declared nation that the international community still classifies as a region of Somalia – puts migrants like them at increased risk of robbery or assault, Somalilanders generally do not wish the duo ill will. Government officials have even been known to stop and provide food and drink to migrants despite their illegal status in the country.

When they reach Bosaso the help will likely come to an end and Qader and Abdi will have to pay. Unlike on land, which the destitute can traverse without charge as long as they can avoid arrest, the sea is only passable by ships operated by smugglers, who are more than happy to continue transporting people to war-torn Yemen for a fee.

Migration to and through Yemen – historically the backdoor for migrants and asylum seekers from the Horn of Africa trying to reach Saudi Arabia – has always put people at risk of death and inhumane treatment. Last year, there were numerous drownings in the Gulf of Aden and Human Rights Watch released a report in 2014 documenting “torture camps” where smugglers held newcomers for ransom.

But a civil war, precipitated by the departure of Yemen’s internationally-recognised government and a Saudi Arabian-led bombing campaign to restore its legitimacy, has made an already perilous journey for migrants all the more death-defying.

Not only has the war given smugglers license to act more ruthlessly than before, but also the ability of aid agencies to provide services to migrants and refugees has been severely compromised and the conflict’s violence has been indiscriminate. Five migrants were caught in shelling near the Saudi border in May and, at the end of March, a camp for displaced people camp was bombed, killing at least 45.

But as migrants and refugees know, the grinding poverty, political persecution or violence that typically push them out of the Horn of Africa, do not conveniently abate as wars break out in their path. So they continue to risk life and liberty and end up on Yemen’s shores. According to figures from UNHCR, more than 10,500 people have arrived in Yemen since March when the bombing campaign began. Although some of those might be part of the 51,000 who are now also leaving, as war in Yemen has created a circular flow in the region.

[Photo: J.Björgvinsson/UNHCR | Exhausted survivors of the Gulf of Aden crossing wait for help on a beach in Yemen (file photo)]

“I know it’s a high risk, but I will take it,” said Fila Aden, 24, in a café in Hargeisa. He is familiar with what lies ahead. This is the second time he left home in Ethiopia for work in oil-rich Saudi Arabia. Although he struggles to provide a precise timeline of events, he estimates he was deported from the kingdom about a month ago after working there for almost a year.

Some aid officials believe that boat smugglers in Bosaso and Djibouti (for the Red Sea route to Yemen) may be downplaying the conflict in Yemen or flat-out lying to clients about the dangers they have seen.

Fila Aden in Hargeisa doesn’t doubt smugglers are sugarcoating forecasts, but he thinks the conflict in Yemen might actually work to his advantage. He is reassured by news that one of his friends just traversed Yemen and slipped unnoticed across the border with Saudi.

“We worry about Yemen. We could be accused of fighting [for a certain side] in the conflict. People are more paranoid now,” he said. “But looking at it from the Saudi perspective, they aren’t concerned about us. They are fighting a war in Yemen.”

As long as those like Aden are willing to go, there is money to be made. Several sources said the smugglers had doubled their asking price in Bosaso, which pre-war ran from $60 to $120 for the sea crossing. Omar, who asked that a pseudonym be used, smuggles Ethiopians from the border into Somaliland. He is fairly new, joining the ranks of the illicit business just five months ago. But the job has proven lucrative. He saw a drop in numbers around the time war broke out in Yemen, but Ramadan (which straddled June and July this year) was profitable, suggesting an uptick in those still willing to go to Yemen.

“People know damn well that they are taking a risk,” he said, when IRIN asked if smugglers were taking advantage of the war and luring clients under false pretenses. But he said smugglers too were taking extra risks, and more and more fearful of arrest. “I feel bad sometimes but what can I do? I have to make a living.”

No refuge any more

While Omar continues to facilitate a migrant march east, deteriorating conditions in Yemen have destroyed a refuge that many once sought.

Abdulqader Ahmed, a 17-year-old Ethiopian migrant, arrived in Yemen in March from Djibouti right as street battles began to erupt in the southern port city of Aden. He made his way to the UN-sponsored al-Kharaz camp nearby, too afraid to begin his journey north to Saudi Arabia. He watched as the camp ran short of food and water, with aid agencies unable to get supplies in. Finally, he managed to secure passage on a ship that evacuated him to Somaliland.

At a migrant response center in Hargeisa, where he was waiting to be repatriated back to Ethiopia, Ahmed said the war in Yemen had helped him reach the realization that his goal of getting to Saudi Arabia would likely cost him his life. He now intends to return to farming with his father in Ethiopia, even though it will be almost impossible to earn a living.

For UNHCR’s Leposky, Yemen’s collapse is particularly concerning because of the country’s history of opening its borders to refugees and asylum seekers. He told IRIN that those arriving now in Yemen are making the costly journey across the sea only to find themselves in a similar situation, if not worse.

“It’s so unfortunate that a country that has provided protection and asylum to people for so many years is now in dire straits.”