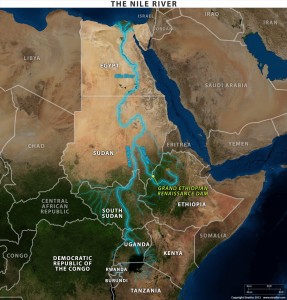 In our April 30 2014 commentary which appeared on several media outlets, we outlined the fallacies of the Egyptian policy towards GERD. It appears that the last few months have witnessed breath-taking diplomatic developments. For one, Egypt has returned to the African Union. It also has been reported that there were several rounds of side and formal meetings between Ministers and the Heads of States and Governments of Egypt, Ethiopia and Sudan. Egypt has also shown a renewed interest on Africa. A number of African leaders attended the recently held economic summit in Egypt which unveiled a new project that aims to build a new city near Cairo. Parallel to these on March 23, 2015 Egypt, Ethiopia and Sudan signed a deal that “ends the Nile dispute.”

In its March 23, 2015 edition Ahramonline published the English translation of the deal. If the document is authentic and translation is accurate, we observe that (i) the document contains several complex statements that are hard to translate into practice, and (ii) many of the clauses favor Egypt much more than Ethiopia. In fact, it is not clear what Ethiopia is getting out of this agreement other than allaying Egypt’s official opposition to the dam. Indeed, Egypt appears to have succeeded in forcing Ethiopia to perform near impossible tasks as any perceived negligence or underperformance can serve as a ground for declaration of dispute. No free nation should be submitted into such a contract voluntarily.

Furthermore, a day after the signing of the “deal”, President Abdel Fattah el-Sisi of Egypt is travelling to Addis Ababa reportedly to address the joint session of the Ethiopian Parliament. Evidently, his mission cannot be anything less than selling the “deal” in Ethiopia. In short, the event appears to be a prelude for the ratification of a document that favors Egypt more than Ethiopia.

While welcoming the tripartite cooperation, we request that the “declaration” be translated into Ethiopian languages. We also ask that an open debate be held in all three countries and the riparian states before the matter is presented to the Ethiopian Parliament. In order to do so, the document should remain an MOU, be revised to address the concerns of citizens and be ratified and take the form of treaty agreement only after proper deliberations are made. Furthermore, as Ethiopia is on the eve of an election, ratification should be deferred until the new parliament is constituted.