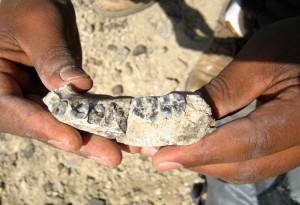 (CNN) With the discovery of a gray, fossilized jawbone in a remote corner of Ethiopia, an Ethiopian student at Arizona State University may have changed our understanding of our earliest ancestors.

The partial lower jaw is the oldest known fossil evidence of the genus Homo, to which modern day humans belong, according to a study published Wednesday in the journal Science.

The jawbone has been dated to 2.8 million years ago — which predates the previously known fossils of the Homo lineage by approximately 400,000 years, according to Arizona State University.

Chalachew Seyoum, a graduate student from Ethiopia, came across the fossil — the left side of a lower jaw with five teeth — while on a field expedition in the Afar region of eastern Ethiopia in 2013.

“Honestly, it was an exciting moment,” Seyoum said, according to a news release from the university.

“I had good experience in field surveying and knew where potential sediments are. I climbed up a little plateau and found this specimen right on the edge of the hill.”

The age of the fossil means it could help fill in an important gap in our knowledge.

It also means the Homo genus could have evolved nearly half a million years earlier than previously thought.

Researchers have previously found fossil remains dating back 3 million years or more, such as the skeleton of “Lucy,” the famous 3.2 million-year-old remains of the species Australopithecus afarensis. Those remains were found in 1974 not far from the site of the latest discovery.

Scientists have also found fossils that are 2.3 million years old and younger, which are in the genus Homo and are closer to modern day humans.

But until now there has been little fossil evidence from the 700,000 years in between — a crucial period in the evolution from hominids like Lucy to the Homo genus.

“The importance of the specimen is that it adds a data point to a period of time in our ancestry in which we have very little information,” said William H. Kimbel, director of ASU’s Institute of Human Origins, in the university’s news release.

“This is a little piece of the puzzle that opens the door to new types of questions and field investigations that we can go after to try to find additional evidence to fill in this poorly known time period.”

The jawbone, found in the Ledi-Geraru area of the Afar region, combines features seen in Australopithecus afarensis with those seen in later specimens of the Homo genus, according to the study.

Professor Kaye Reed, of Arizona State University, said the discovery was the result of years of searching in the area.

Surveying began in 2002, she said, but researchers only began to pick up fossils in the area where the jawbone was found in 2012, having realized the sediments there were old enough to yield Australopithecus afarensis specimens.

“Instead, we were rewarded with a much more exciting discovery,” she said.

Already the team has been able to establish that this early human ancestor walked on two legs and lived in a dry, arid climate, Reed said. Researchers are still working to determine what it ate and whether it used stone tools.

“It’s an excellent case of a transitional fossil in a critical time period in human evolution,” said Kimbel.