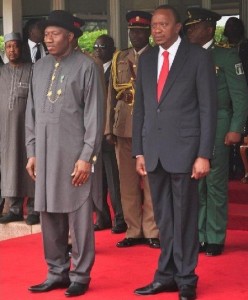 Representatives of the government and business communities of Kenya and Nigeria have strengthened the economic, political and social links between both nations after signing a number of agreements on Tuesday in Abuja.

The signing ceremony, which reportedly occurred at the State House, was overseen by the Presidents of Nigeria and Kenya, Goodluck Johnathan and Uhuru Kenyatta respectively, as well as diplomats and business people from both countries.

Reports indicate that the seven agreements covered numerous sectors, including; security, immigration, trade, agriculture, technology and entertainment, as well as oil and gas.

The leaders of both nations have relayed their eagerness to increase trade and cooperation in order to capitalise on the opportunities in both regions.

Many pundits have welcomed the agreements, noting that both countries form a crucial part of the economic backbone of their regions.

President Johnathan noted that “with Nigeria and Kenya working together we will not only help the two countries but also create a platform to leverage Africa on trade and investment.”

He called for both nations to collaborate and leverage their weaknesses by capitalizing on the strengths of one another.

Both leaders also condemned the rise of terrorism in their countries and have vowed not to let this derail their national and continental objectives.

President Kenyatta is in Abuja for a three-day visit to attend the World Economic Forum.