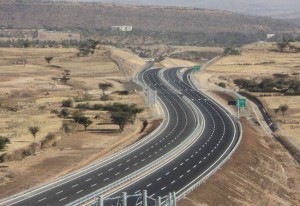 Prime Minister Hailemariam Desalegn of Ethiopia and Prime Minister Li Keqiang of China have inaugurated a major highway in Addis Ababa on Monday.

The 6-lane, 80 kilometers Addis Ababa-Adama express way will be the first road with toll booths in the country. The highway is expected to significantly improve access to the south-eastern region of the country.

Reports indicate that the Chinese Export Import (EX-IM) Bank provided a loan of about $530 million (out of the estimated total cost of $612 million) for the construction of the highway. China Communications Construction Company (CCCC) is also reportedly in charge of the development of the highway.

Officials have revealed that work on the second phase of the road is set to begin shortly.

Commentators have noted that the project is expected to have a notable impact on trade between Ethiopia and Djibouti – as it will ease access to the port of Djibouti.

Prime Minister Keqiang, who also visited the sites of other Chinese-sponsored project in Ethiopia, commended the bilateral relationship between both nations.

Reports indicate that more than 16 agreements have been signed by China and Ethiopia during the short and reportedly rare visit by the Chinese premier.

China has quickly become a major developmental partner of many African nations.

According to Prime Minister Desalegn, China is currently Africa’s largest trading partner – with a total trade volume of over $200 billion.

The premier revealed that trade between Ethiopia and China has steadily grown since ties were established in the 70’s. He went on to note that this relationship is important to levelling the developmental-gap between both countries.

Reports indicate that up to 500 Chinese companies are currently operating in Ethiopia, and generate over $1 billion annually.

The Chinese premier is set to also visit Kenya, Angola and Nigeria on his first Africa tour after leaving Addis Ababa today.