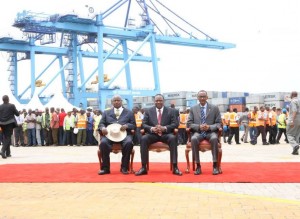 Kenya is set to launch an online system for clearing cargo next month.

President Kenyatta will officially roll out the system in May, reports indicate.

Commentators say the long-awaited electronic system will facilitate domestic and international trade at the Mombasa port by resolving persistent delays.

The current clearance system reportedly costs Kenya roughly US $300,000 in losses due to delays. Officials say presently people need to wait for an average of 5-8 days for their cargo to be cleared.

With the new electronic platform, this period will reportedly decrease to a maximum of 3 days.

The government implemented the new system in phases and plans to establish it at the country’s Mombasa port, the Jomo Kenyatta International Airport, and at the country’s borders, sources reveal.

Earlier in the year, the Kenyan government began the process of overhauling the clearance system, which has attracted criticisms due to recurrent technical hitches.

Analysts say the new system will improve automation of revenue and customs collection processes across the country’s borders. Last year, the Kenyan President revealed plans of automating the clearing process at the Mombasa port in order to improve efficiency.

He also directed all government departments involved in the management of the port to streamline their operations. Sources indicate that Kenya Trade Network Agency (Kentrade) is responsible for the implementation of the system, which is said to cost $ 22 million.

Kenya joins the likes of neighboring Rwanda, which was reportedly the first East African country to automate cargo clearance. Rwanda launched its system with the aim of decreasing the time and cost of conducting business with its East African neighbors.

According to reports, Rwanda automated its clearance systems in 2012 and claims to save $9 million yearly.

Kentrade officials have disclosed that the trials for this project began last year.

The online system will enable traders to pay for and access pre-clearance documents including export and import permits online, media reports indicate. Government officials revealed to the media that the online system could electronically disseminate clearance documentation obtained from delivery services to the appropriate authorities for relevant processing and approvals.

Based on the current volume of goods transported and imported through Kenya, experts estimate that the resulting yearly savings to Kenya’s economy during the initial three years of the project’s implementation will range between $150 and $250 million.

According to KenTrade’s C.E.O, Alex Kabuga, speaking during an interview last year, he said that the government lost 2 billion because of inefficiencies during cargo clearance.

Mr. Kabuga added that the platform would transform the manner in which business transactions occur in Kenya by simplifying and integrating the systems of the various stakeholders that traders must deal with.

Besides increasing trade competitiveness in Kenya, analysts expect the system to decrease the cost of conducting business in Kenya’s economy.

Officials from KenTrade say efforts to integrate both applications have been unsuccessful largely due to down time and system limitations.

Photo/Dredging Today: President Uhuru Kenyatta of Kenya, along with President Yoweri Musuveni of Uganda and President Paul Kagame of Rwanda during the commissioning of berth 19 at the Mombasa port last year.