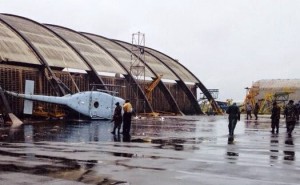 The Vice President of Tanzania, Gharib Bilal, and several other top officials escaped unhurt after a helicopter they were in crashed into a wall as it took off on Sunday morning at the Julius Nyerere International Airport, Dar es Salaam.

Airport Police Commandant, Commissioner Khamis Selemani told the press that the accident was caused by a technical problem.

Meanwhile, officials have disclosed that an investigation has been opened into the incident.

Reports indicate that Minister of Works, John Pombe Mugufuli, Dar es Salaam Regional Commissioner, Mecky Sadick and Special Police Zone Commander, Suleiman Kova, as well as 3 journalists and an aide of the VP were also in the aircraft when the incident occurred.

General Davis Mwamuyange, chief of Tanzania People’s Defence Forces (TPDF), disclosed to The Citizen that the officials were about to go on a tour of flood-hit areas of the capital and coast.

He further noted that the Augusta Bell 412 helicopter was supposed to be in good shape and had undergone safety tests before the fateful flight.

Meanwhile, Eric Komba, spokesman for TPDF, has revealed that the deputy leader and his entourage “went on the trip as scheduled” in a different helicopter.

Tanzania has been hit with heavy torrential rains since last week which has left over 10 people dead, 100’s displaced and led to the destruction of properties worth several thousands of Shillings.