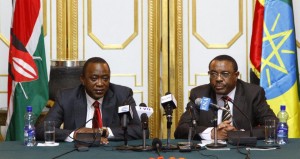 Ethiopia and Kenya plan to speed up the implementation of a Special Status Agreement (SSA) to improve trade and investment between one another.

This decision was reached when a 60-member delegation from the Ethiopian private and government sector met with their Kenyan counterparts, reports indicate.

The delegation from Ethiopia were reportedly visiting Kenya to explore potential business partnerships between the two allies.

Speaking during an interview, Ms. Phyllis Kandie, the Cabinet Secretary for the East African Community, stated that Kenya seeks to venture into mutual tourism marketing with Ethiopia.

She further stated that the move would help both nations complement what each has to offer, while exploiting tourist visits between the two states. Ms. Kandie added that Kenya would explore the possibility of training Ethiopian hospitality and tourism professionals as Kenya plans to establish hotels in Ethiopia.

The signing of the bilateral agreement occurred in 2012 after the Ethiopian government lifted restriction on Kenyan investors. Observers say the agreement will enable Kenyan businesses access the Ethiopian market besides boosting trade volumes between the two states.

During a recent state visit to Ethiopia, Kenya’s President, Uhuru Kenyatta and Ethiopia’s Prime Minister, Hailemariam Desalegn held a joint conference during which they commented on the imperativeness of reinforcing the long-standing relations between both countries.

Meanwhile, Kenya Association of Manufacturers (KAM) has appealed to the Kenyan parliament to ratify the agreement, which Ethiopia reportedly approved two weeks ago. KAM’s CEO, Betty Maina said that the ratification of the agreement would stimulate financial growth between both nations as Kenyan manufacturers can establish themselves in the neighbouring market.

On a similar note, Mr. Sisay Gemenchu, Ethiopia’s Industry Minister, stated that business-to-business partnerships between the two nations would enhance regional trade. In 2011, the two states are reported to have signed an accord that created more favourable conditions for trade.

Mr. Gemenchu added that development of the road network between Ethiopia and Kenya would guarantee unhindered movement of goods. According to various sources, the special status agreement details numerous areas of collaboration in trade, infrastructure, and energy.

Analysts expect the agreement to grant Kenyan companies the freedom to commence operations in Ethiopia once the government approves the agreement. Observers say that Ethiopia’s growth has stimulated the desire of local companies seeking to set up regional subsidiaries.