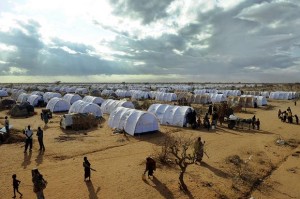 The United Nations has censured the Kenyan government’s decision for all refugees in the east African nation to relocate to two designated refugee camps following a spate of terrorist attacks.

Adrian Edwards, spokesperson for the United Nations High Commissioner for Refugees (UNHCR), explained to reporters on Saturday, that “scapegoating refugees is not the answer.”

According to him, while the need to address the situation is unquestionable recognised, “Blanket implementation of encampment measures is arbitrary and unreasonable, and carries a threat to human dignity.”

He further noted that the international agency is “in close contact with the Government to see how its security concerns can be addressed in accordance with international legal norms and practices.”

On Tuesday, March 25th, Interior Minister, Ole Lenku, announced the government’s directive for all refugees to report to the Dabaab and Kakuma refugee camps in eastern and northwestern Kenya respectively.

He justified the decision, noting that it was necessitated by “emergency security challenges.”

The Interior Minister further warned that “Any refugee found flouting this directive will be dealt with in accordance with the law.”

Many rights activist groups (such as Human Rights Watch) and Somali nationals around the world have raised their voices in dissent against the move by Kenyan authorities.

The deplorable living conditions of the refugee camps, as well as the financial burden of the decision on the government, has been the topic of many online discussions by Somali nationals since the announcement was made.

Commentators have also questioned the ambiguity and rationale of the order by the government.

While some have queried how the reportedly 50,000 refugees wanted by the government will be identified and rounded up. Others have speculated that the order covers only immigrants without legal status.

Due to the war in Somalia, thousands of Somalis continue to migrate to neighbouring Kenya. Reports indicate that although many of these individuals have been in Kenya for many years (some even own and operate businesses in the country legally), a large percentage of them have not been able to secure their stay officially.

Kenyan officials have expressed fears that terrorists filter into the country through its porous borders masking among refugees – some of whom they recruit and use to further their diabolic schemes.

Reports have emerged that the attackers of the Westgate Mall last year entered Kenya illegally from Somalia. Also a few weeks ago, police officers in Mombasa intercepted a bomb-strapped car as it entered the coastal city.

Officials have linked these terror operations – as well as last week Sunday’s attack on the Joy Repentance and Holiness Church in Likoni district, Mombasa, – to al Shabab.

The al Qaeda-linked group has justified these gruesome attacks on several nations in the region as its way of forcing them to withdraw from the African Union Mission in Somalia (AMISOM).

Meanwhile, Kenyan authorities have reportedly tightened security in Mombasa and Nairobi to curb the tendency of terror attacks and violent riots.

Religious tension has increased in Kenya over the past few weeks, following a police raid on a mosque and a terrorist attack on a church.