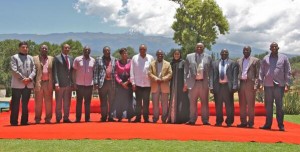 President Uhuru Kenyatta of Kenya on Friday revealed that several officials of his government have agreed to cuts in their salaries to reduce the nation’s public wage bill.

According to a statement by the President at his first informal cabinet review at the St Safari Club, Nanyuki, both the president and his deputy will see a 20% reduction to their earning. Cabinet secretaries have reportedly also agreed to a 10% cut from their wages.

The president further revealed that the salaries of independent commissions contracted by the government are set to be evaluated by the country’s Salaries and Renumeration Commission.

Capital FM estimates that the cuts could bring up to Sh12 million to Kenya’s annual budget. President Kenyatta has said that the funds will be dedicated to supporting his government’s transformation agenda.

Last month, officials noted that the devolution of some services to county authorities led to confusions in the country’s budget, which ultimately caused a rise in the public wage bill.

Kenya’s public wage bill is reported to be about Sh450 million currently.

President Kenyatta told the cabinet secretaries that “Prudent governance structures and rules will be enforced; wastage in my government will be significantly reduced.”

At the 4-day review, which President Kenyatta said was convened “to pause, to reflect, and together to identify those parts of our practice which we can improve,” the president also gave account of several ongoing and forthcoming projects in various industries such as health, education, agriculture, information technology and trade.

Photo by the Kenyan government: President Uhuru Kenyatta and members of the Budget and Appropriations Committee at the St Safari Club, Nanyuki.