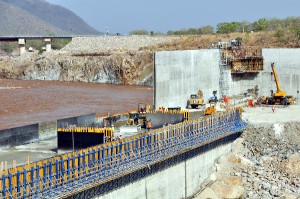 The Italian Ambassador to Egypt, Maurizio Massari, has revealed that his government is willing to mediate the negotiations between Ethiopia and Egypt over the contentious Grand Ethiopian Renaissance Dam (GERD).

According to a report by Egypt’s Aswat Masriya, Mr. Massari noted that his government has no administrative influence over Salini Construction Corporation – the Italian firm in charge of the gigantic dam, which will occupy up to 1,680 kilometers.

However, he expressed his country’s readiness to oversee dialogue between the two nations at the center of the dispute.

In 2011, Egyptian authorities raised alarm over the construction of the GERD on the Blue Nile, which is reportedly the arid nation’s primary source of freshwater.

Despite numerous meetings between representatives of Egypt, Ethiopia and Sudan, the dispute has grown increasingly sour.

Reports indicate that Egyptian authorities have resolved to embark on an international smear campaign to prevent Ethiopia from successfully completing the dam.

However, the dam’s construction, which is being completely funded by Ethiopian authorities, has reportedly not been affected by the campaign.

A representative of Ethiopia’s Electrical Power Company (EEPCO) told the media last week that the project was over 30% completed.

Officials have also noted that the hydro-electrical facility is set to begin generating power by August this year.

While reports indicate several high profile Egyptian authorities have travelled extensively in the past month to garner support for the campaign against the GERD.

Ethiopian officials insist the dam meets international standards and that the Egyptian government’s fears are overblown.

Earlier in the month, Sudan’s Foreign Minister, Ali Karti, voiced his opinion concerning the brouhaha over the GERD.

According to him, Egypt’s strategy of initiating a campaign to gain public support against the dam’s construction has exacerbated the dispute.

He noted that the Sudanese government will continue to work with Ethiopia to bring Egypt back to the negotiating table. However, he added that his country has not taken any side in the dispute, contrary to the reports by some Egyptian media sources.

Critics have, meanwhile, blamed Egyptian authorities for stalling the talks. According to them, Egyptian officials seem to have pulled away from the negotiating table once Ethiopian authorities began expressing confidence that dialogue was the only way to traverse the dispute.

Photo by The Ethiopian Herald.