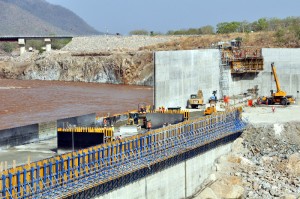 The spokesman for Ethiopia’s Foreign Ministry, Dina Mufti, has refuted a request by Egyptian authorities that the construction of the Grand Ethiopian Renaissance Dam (GERD) is halted until the impasse between both nations is resolved.

According to a report by Mogadishu’s Dalsan Radio, Mr. Mufti reaffirmed Ethiopia’s commitment to negotiations to resolve the impasse, but described the demand by Egyptian authorities as unacceptable.

Egypt and Ethiopia have been engaged in an unsavory public dispute over the construction of the GERD on the Blue Nile – which is reportedly the main source of freshwater for Egypt.

While Egyptian authorities base the legitimacy of their calls for the dam’s construction to be halted on colonial-era agreements between Nile tributary nations – which, according to critics, favors Egypt and Sudan. Ethiopian authorities base the dam’s construction on a new agreement between Nile tributary nations – excluding Sudan and Egypt.

“The upper riparian states have the right to use the Nile for their development as far as it doesn’t cause any significant harm on the lower riparian countries and that is why Ethiopia is building the Grand Ethiopian Renaissance Dam (GERD),” Mr. Mufti told reporters.

Although reports have emerged that Egypt’s international campaign against the construction of the dam is beginning to negatively its funding.

Semegnew Beleke, the head of the project, has revealed that the dam’s construction has continued uninterrupted and is about 30% completed. He further noted that the $4.2 billion building is set to be completed on schedule in 2017.

Currently, the talks between Ethiopia, Egypt and Sudan over the dam’s construction has hit a brick-wall.

But Ethiopia’s Water and Irrigation Minister, Alemayehu Tegenu, says the Sudanese government is collaborating with Ethiopia to bring Egypt back to the negotiation table.

Egyptian officials pulled out of the meeting scheduled for the beginning of this month following repeated failure to have their concerns addressed.

Despite recommendations by a panel of experts from the three nations that more studies should be carried out into the dam, given its unprecedented size. Egypt’s demand for an international panel of experts to conduct a new study on the dam have been rebutted by Ethiopian officials, who say it is unnecessary.

Photo by the Ethiopia Herald: Site of the Grand Ethiopian Renaissance Dam construction.