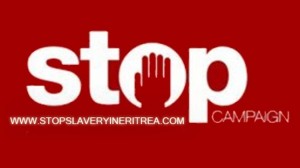 Since the beginning of this year, several civil liberty groups have launched campaigns against the government of Eritrea’s compulsory national service policy, which some have described as akin to a form of indentureship.

Although national service is supposed to last 18 months for persons aged 18 – 40, critics report that many people have been forced to continue indefinitely, sometimes without the opportunity to further improve their skills.

Reports also indicate that many people over 50 years of age are forced to perform national service.

According to representatives of the Stop National Service Slavery in Eritrea Campaign, many nations at the just ended United Nations Universal Periodic Review meeting in Geneva expressed interest in the situation in Eritrea and have relayed their support for the campaign to protect the basic human rights of Eritreans.

Some sources claim children as young as 17 are recruited into national service during their final year in school.

Pundits have connected this forced recruitment policy to the migration of thousands of Eritrean youths to European, Middle Eastern and Asian countries yearly.

A large percentage of the Eritrean emigrants reportedly die on the perilous journey, while an even larger percentage reportedly fall into the hands of unscrupulous ‘agent’, who exploit them for profit.

Many say the young Eritrean refugees are left with no option, since they face imprisonment if they refuse to be conscripted into national service.

There has been no elections in Eritrea since the nation gained independence from Ethiopia in 1993. Currently, reports indicate that neither opposition parties nor independent media houses exist in the nation of over 6 million people.

Critics have accused the Eritrean government of imprisoning thousands of political dissidents and other prisoners of conscience, many of whom are reportedly forced to put up with terrible conditions in incarceration.

Due to the government’s dictatorial distribution of citizens to different industries, critics say the Eritrean economy has remained relatively stagnant as there is a shortage of qualified workers in many professions.

Currently, mining is reported to be the largest industry in the country, mainly due to foreign investments. Reports have emerged that many citizens are forced to work in mines for foreign companies under terrible conditions.

The Eritrean government has repeatedly justified these reported inhibitions on civil liberty saying they are necessitated by the unconsolidated security situation in the country.

Critics say although a large section of the Eritrean population have received military training and own weapons, the government claims the nation is at risk of attacks from rebels allegedly sponsored by Ethiopia.

Photo: The logo of the Stop National Service Slavery in Eritrea Campaign.