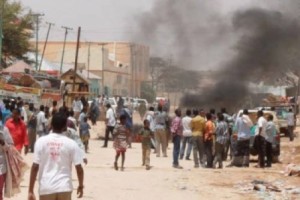 Protests erupted on the streets of Hargeisa town, Somaliland, on Saturday 28th, December over a severe shortage of water in the city.

Hundreds of protesters took to the streets following a three-day strike by private water distributors recently. The water distributors are reported to have gone on strike in an attempt to force the government to alleviate the high road tax enforced on their water tankers, according to reports.

The angry protesters are reported to have set fire on car tyres and blocked the roads. According to witness reports, the demonstrations also led to the death of one person.

During the protests, the demonstrators were reportedly met with live ammunition from the Special Police Unit (SPU) and Rapid Reaction Unit (RRU), who were allegedly dispatched early that morning. As a result of the shots, at least three civilians were wounded, according to reports.

Meanwhile, Ali Mohamed, Somaliland’s Interior Minister, has said the government would respond to the public demand. He revealed that a committee consisting of representatives from the finance ministry, interior ministry, and water trucks would evaluate the extent of the complaint and water scarcity.

It is alleged that the road tax bill, which was recently approved by the parliament has forced the water suppliers to halt water provision to the Hargeisa residents. The Somaliland parliament approved the disputed tax bill following several amendments and disputes among members.

The Interior Minister pointed out that water shortage was a concern for every citizen. He further stated that tax payment was obligatory. The Minister reminded the residents of the recently renovated roads whose completion necessitated tax money from the citizens.

The protesting tank owners allegedly concurred that the government had recently eased road conditions in different regions where water is drawn. However, the tank owners asserted that they have no problem paying their usual taxes. However, they say the new tax approved by parliament has been a burden on their businesses.

Observers say the unprecedented move by the Hargesia distributors is likely to result in unhygienic standards in the city. The private distributors, who supply water to about 70 % of Hargeisa residents, assert that the cost of operations is untenable due to the recent increase in road taxes.

During a press briefing, Mr. Abdilahi, the distributors’ spokesperson, maintained that the tank owners would not offer services until the government rescinds the imposition of the new taxes. The spokesperson also stated that they had initially contacted the authorities prior to going on strike however; they failed to reach an agreement.

Aside from households, those affected most by this move include the hospitality and construction industries. Meanwhile, service providers such as hospitals will be forced to increase patient fees in order to account for the anticipated exorbitant costs of availing water.

As the standoff between the government and the distributors continue, bottled water is said to become a precious commodity for many Hargeisa residents. Nevertheless, it is anticipated that relevant parties will reach an agreement following subsequent negotiations.