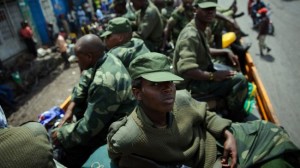 A Ugandan government spokesman has warned the government of the Democratic Republic of Congo that M23 rebels could regroup following an impasse between the rebels and DRC representatives during talks in Kampala.

The much anticipated agreement was expected to mark a major victory for the DRC in the fight against anarchy in eastern Congo.

The DRC’s army with the support of UN troops have succeeded in unsettling M23 from their strongholds in Congo, forcing the rebel group to retreat to makeshift camps in Uganda pending the outcome of this agreement.

Reports indicate that the talks were going excellently–both parties had allegedly inked their initials on the 11-page document, leading the rebel group to proclaim an end to hostilities pending the official signing of the agreement on Monday.

However, a dispute arose between both parties over the title of the agreement. According to Okello Oryem, Uganda’s Deputy Foreign Affairs Minister, while DRC officials want to term the deal a “declaration”, M23 say the deal is a “peace agreement.”

“What are we supposed to sign? No country in history has signed an agreement with a movement that has declared its own dissolution,” Lambert Mende, DRC’s Information Minister and the government’s spokesman explained.

But Bernard Bisimiwa, the spokesman for the rebels told the VOA that “If the government of DRC wants war, [it] doesn’t need to sign anything with us. But if [they] want us to sign an agreement, we say that this document has to respect what we agreed [to] on November 4.”

Pundits speculate that both parties may be projecting bigger differences between themselves unto the almost inconsequential dispute over the title of their deal. One of the issues in contention is the fate of M23 leaders after the deal. The rebel group have requested an amnesty is granted to them, but the DRC government says the suspects must face trial.

Meanwhile, Ugandan authorities have revealed that Sultani Makenga, an M23 rebel leader currently in Uganda, is not under arrest and will be handed over to the DRC only after the agreement is signed.

Representatives from the United Nations, African Union, European Union, the United States and the United Kingdom, who were in Kampala to witness the signing of the agreement on Monday, have expressed hope that both sides would resume talks and finalize the signing of the agreement. In a joint statement the delegates noted that “the parties have expressed no difference on substantive points within the draft document.”

The Ugandan government’s spokesman also expressed optimism that the talks will continue. “Both parties are still here in Uganda…the talks have not been officially called off,” he said.

The breakdown in the negotiations being mediated by the government of Uganda is also alleged to represent the distrust between the governments of Uganda and DRC, which has reportedly affected attempts to stabilize the region for many years. According to the DRC government’s spokesman, Uganda acted as though it was “part of the conflict” when it interfered in the DRC’s request for M23 rebels to pledge not to take up arms again.

The DRC accuses Rwanda and Uganda of supporting the M23 rebel group. However, both countries have emphatically denied these charges.

M23 was named after the March 23rd, 2009 agreement between the government of the DRC and several rebel groups in eastern Congo. The March 23rd deal, which broke down soon after it was signed leading to the creation of the rebel group, had proposed the integration of rebel fighters into the Congolese army.