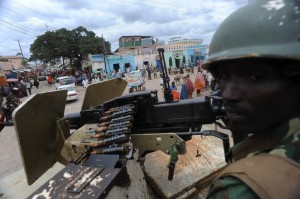 The Ethiopian National Intelligence and Security Service (NISS) and the Federal Police cautioned the people of Ethiopia to be on high alert for terrorist attacks last week. The security agencies said they had gathered evidence that Al Shabab is planning to attack the country. However, they failed to specify where and when the attacks should be expected.

This warning was followed by a bomb blast in a minibus in western Ethiopia, which left about 4 people dead. But neither Al Shabab nor any other terrorist group has claimed responsibility for the attack.

Earlier last month two Somali nationals were reported to have been killed when a bomb they were creating exploded unexpectedly. Ethiopian officials revealed that the two unidentified suspects of Somali origin may have intended to detonate the explosive in a stadium or any other venue packed with fans watching the football match between Ethiopia and Nigeria.

“More activities of this nature are expected to happen in Ethiopia, and therefore the need for raising security levels is very, very important,” Dina Mufti, spokesman for the Ethiopian Foreign Ministry explained while reiterating the security alert yesterday.

According to Ethiopian officials, the terrorist group are being supported in their schemes by the government of Eritrea. But Eritrean officials deny these allegations.

In the past week, soldiers and police officers are reported to have been notably present at several locations across Addis Ababa.

Ethiopia is currently home to over 200,000 Somali refugees. Ethiopian officials have expressed fears that terrorists may be filtering into the country to recruit and spread their ideology through the nation’s disputed region bordering Somalia.

For many decades the Ogaden National Liberation Front (ONLF) has been at war with the Ethiopian government for the the sovereignty of Ogaden—the region separating Ethiopia and Somalia.

In a press release published last week the ONLF revealed that they have not detected Al Shabab’s presence in the region. The group however claim the security alert announced by the government is a camouflage to hunt down supporters of the ONLF in light of recent attacks by the Ogaden National Liberation Army on the Ethiopian army.

Despite these claims, the Ethiopian Foreign Ministry’s spokesman made it clear in his statement yesterday that he perceived the threat to be from “external terrorist elements not from internal home grown ones.”

Al Shabab declared war on Ethiopia and other nations for contributing their troops to peace keeping missions in Somalia. The Ethiopian government deployed soldiers to Somalia in 2011 to support the African Union Mission in Somalia (AMISOM) and Somali forces. Recently, the Ethiopian government expressed interest in officially joining AMISOM in order to strengthen the resistance against the terrorist group.