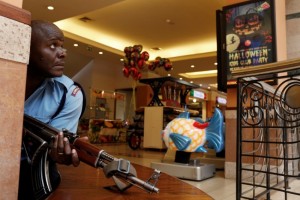 After 3 days of heavy gun battle, Kenyan security forces have been able to take over the Westgate mall. Presently, the attackers are believed to be holed up in a supermarket.

According to recent reports on the situation, the government has succeeded in freeing most of the hostages in the building. In a press conference today, Joesph Ole Lenku, Kenya’s Cabinet Secretary for the Interior said Kenyan troops have taken over all the floors in the Westgate mall after a fierce battle with the al shabab militants. Earlier today, the militants were reported to have lit the supermarket on fire in order to create a diversion, while they unsuccessfully tried to escape.

The entire nation has been on the edge of its seat since the fighting began. Authorities confirmed that they have discovered the 10-15 person militia is composed of individuals from different nations. Currently, the death toll stands at 65, while the number of people injured is about 170.

This attack is one of the most deadly in recent times and the Kenyan government’s ability to deal with this situation will have an impact on its image for many years to come. Speaking on this issue, Gen Julius Karangi, Chief of Staff of the Kenyan army said almost all the nation’s soldier are working to resolve the issue. He added that they have surrounded all the entry and exit points to the building, making it impossible for the militants to escape.