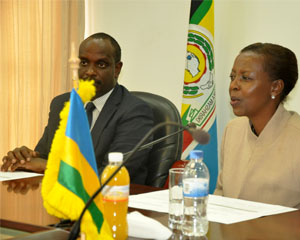 The East African Community (EAC) has settled on Rwanda to host the upcoming East African Science and Technology Commission (EASTECO).

Louise Mushikiwabo, Rwanda’s Foreign Minister, and Dr. Richard Sezibera, the EAC’s Secretary General, are reported to have signed the agreement on Tuesday in Kigali.

The new commission, which is aimed at coordinating and promoting technological activities within EAC member states, is set to begin operations this year, reports indicate.

Sources have disclosed that the proposed yearly budget for the commission is $1.8 million, which the partner states and secretariat will finance.

After the signing, Dr. Sezibera highlighted the importance of investing significantly in technology and science to permit competition and development in the region. He also commended the Rwandan government’s leadership in science and technology in the region.

Mushikiwabo remarked that the agreement is an indication of Rwanda’s dedication to promote technology and science for her peoples’ benefit.

She added that the member states will collectively realize the goal of promoting the application of technology and science.

Mushikiwabo appealed to the EAC states to co-operate in their efforts to promote skill development and a shift from policy to practice.

The Secretary General further added that investment in technology and science is necessary to fast-track development.

Reports indicate that the commission will function as the main advisory organ for the EAC in research areas and facilitate technological innovations.

Many analysts have lauded the move to create the commission by the EAC. According to them, technology and science are the keys to unlock the region’s potential.

EASTECO is also expected to address and identify major issues relating to science and  facilitate relations among scientists across every discipline. Observers say that the commission will encourage the input of scientists from member states in global scientific endeavors and offer authoritative and independent advice.